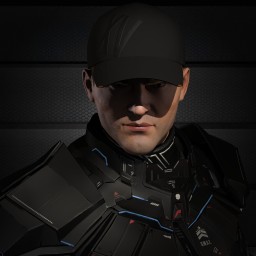 What am I doing here? I shouldn’t be here with these conceited idiots. They think they are special just because they are immortal. But as soon as they sit in their spaceship and dock from the station, they shit their pants. They are afraid of losing their ship and with it ISK… even though they are immortal. Do any of us capsuleers actually think about the crew of our ship? Gods, that’s what they call us. But actually we are all devils. We can’t die and we don’t give a shit about the lives of others. Fun and money, that’s our world.

I think I drank too much. I really need to figure out what the bartender is mixing into my Quafe. The cocktail is just exquisite. I just have to drink, when looking around. All these “mission runners” piss me off. They brag about their courage, but is it courage if you can’t die? Insanity is a better term.
I haven’t been through the training program to become a capsuleer for long. With earning of the license, I have slowly but inexorably changed. Not being able to die, doing nevertheless and then waking up again, that leaves its mark on every capsuleer. Over time, they all go crazy. We fight hopeless battles and die in them. We wake up again, it doesn’t bother us. Money is often our limiting factor, but that’s complaining on a high level. 95% of the universe’s inhabitants couldn’t even afford a simple shuttle, even if they saved their entire lives. Don’t even get me started on frigates.

Are we monsters? Or simply victims of circumstances? I should definitely have another one of those drinks. After that, we’re off, we’ve announced a battle fleet. I think I’ll ride in my Interceptor. It cost 20 million ISK and has 5 crew members on board. I don’t expect to come back in this ship. My crew doesn’t know that and won’t know until it’s too late. If they are very lucky, some may save themselves. But I don’t care and I have no idea if any of my crews ever survived.

Monsters, devils, egoists, idiots, those should be our names, but they call us gods. We judge life and death. And the latter is clearly in the majority.

This is my diary. It should show me the life of a “god”, a “god” who has little fear for his ship. I hope you enjoy reading it. Eve is cruel.