The greed and the fail

He wasn’t entering from the three. I was there the last several minutes. The number two is a small hole, so he can’t be there too. Where did he cloak after launching his probes? Number one or the high sec exit? I’ll cloaky monitor the High Sec exit.

The probes disapeared. The Dominix is on directional scan again. He’s at the one, a wormhole connection to a C3. He even didn’t change the shipname. Negligent. He’s sure warp to the High Sec hole.

“Winzent speaking, the Dominix is at zero at the one. I attacked him, he jumped.”

I’m already on my way. My Tengu pushes itself invisible through the warp tunnel. It feels torturously slow. Finally, the wormhole. The ship is trembling. We are dropping out of warp. Again one more jump in an unknown system. Soon. I’ll get the Dominix.

The sensor systems are rendering a picture of the system. Sun… wormhole… and the Dominix. That’s warping away. Damn. We were to slow. Where is he warping to? The sun? This would be to easy. But the luck is with the idiots. Warping to sun – distance 100km. Cloak activated.

The light effects from the warp tunnel would dance on the Tengus hull, if the ship wouln’t be cloaked. But the cloak is working as intended and is moving the light around the hull. Unseen I land at the sun. With the Dominix, that is really there. Is this a trap? Or is he just in panic? At least nobody else is here according to directional scan. Just the Dominix, me and Winzent in a bomber.

The cloak deactivates and the sensors starting to recallibrate. Five annoying seconds, but the Dominix is slower. Lock done, Warp Scrambler active. He won’t get away. Fire at will! Scrambler and Webber? It seems I have to stay here too, until I killed him. His shield is gone. His armor is can keep up. But now the Manticore is firing too, we’ll break him.

Or not. The bomber got killed by his dones. At the end the Manticore is just a paper plane. Short break, gone. At my ship, his drones are doing a goodjob too. Luckyly my Tengu is well tanked. But he too. It seems, that we are in a patt situation.

Winzent getting a Tengu too? Great. With this, the Dominix will break. He has to refit first…? I have time. The incoming damage is low enough. But I have a bad feeling about this.

The friedly Tengu is in warp to my position. Oh, and a Flycatcher? Two Tengus against one Dominix and one Flycatcher? What else is coming? Great… a Drekavak.

Winzent should escape as soon as possible. I have no chance. Thanks to scram and web I’m slower then the Dominix. And the Flycatcher. At least I have no implants in my clone.

The missiles are driving the Flycatcher away. Winzent escaped. One survived. But I’m pissed. I can’t get away. When the Drekavak wouldn’t be here… Gnaaaahhh… My tank can’t keep up with this damage forever.

I can’t break the Dominix. But my shield is. May I would’ve had more chances with the Drekavak? Lets switch the missiles at the Drekavak. Damn, he’s going down fast. Not fat enough. I should’ve attacking him first. 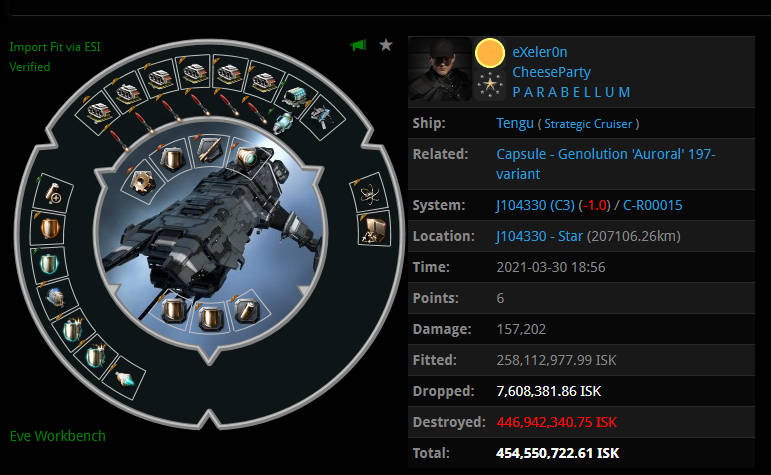 Hopefully they let my crew escape. My capsule and the emergency pods are ejected simultaneously. 300 humans escaped the exploding Tengu. I dropped an emergency call to Sisters of EVE.

They won’t rescue me. It’s not neccesary. THe capsules hull is cracking. Eyes closed. A stab. A flash. Darkness.

I overestimated myself. I was to greedy. At least Winzent could escape.

In the eye of the storm