New month, new topic of the month. This month, the German bloggers have chosen the topic “EVE Online in a different genre”.

So in which genre could I imagine an EVE Online game?

Since I am a shooter fan, I would actually suggest a shooter. But wait, CCP already had that with Dust 514, a game that I thought was really great – if it hadn’t been on the PS3, but on the PC. It’s a pity, but I just couldn’t cope with the controller. But since then, CCP in London has been working on a shooter again and again, but it was scrapped before it was released. I think I remember at least two prototypes.

Anyway, so no shooter right now. I’m sure it will come Soon™. What other genre would be suitable for EVE Online? I would actually find a role-playing game in the vein of Cyberpunk 2077 pretty awesome. No open world stuff, a real role-playing game. The EVE lore has a lot to offer. You could make several parts out of it. For example, a campaign for each faction. The technology allows “physical upgrades” – so a level system would also be feasible. 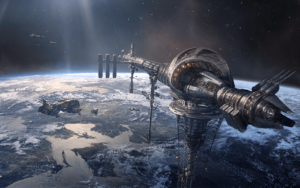 Haven’t you always wanted to prevent a plot by Minmatar slaves in the Amarr capital? Or prevent a corp theft on a Keepstar? Go on a covert operation as Mordus Legion mercenaries? Or do it all together? Switching bodies and roles like the Broker?

You could even add a very crazy feature then: Walking in Stations. With a bar, casino and a visit to Scotty!

This month, there is of course a giveaway again. A Maller Scope Syndication YC122 SKIN, or rather 15 of them.
Just leave a comment here on the blog for a ticket. You will get a second ticket if you answer the following question in your comment:

In which genre can you imagine EVE Online?

In the eye of the storm

Buy, sell, the ISK must run